We've been joking around a lot about how we seem to get things in twos, so I thought I would introduce you to our other "twos" in the household!

This is Grey, our first addition. We adopted her in June of 2007. She's independent and only pays attention to us when her food bowl is empty ... and loves to crawl up my front when I'm brushing my teeth. :) 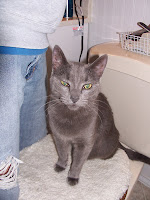 We couldn't let Grey be lonely, so we adopted Copper in September of 2007. She came free from a family who had too many kittens ... but we thought she was a boy until we got her fixed! Copper is a Daddy's girl and hardly ever comes to hang out with me. 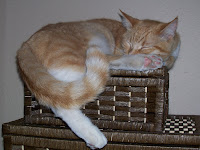 We got a Shiba Inu for my parents in November of 2007, and decided that we loved the breed so much that we kept our eyes open for a reasonably priced one. We found Roxie on Craigslist in January of 2008 -- her "best friend" had been eaten by coyotes and her owners didn't want her to meet the same fate. Roxie is our polite girl, and she likes me the best. 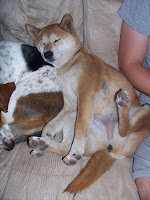 We vowed to ourselves that we were done adopting, but Tony has always had a special place in his heart for Basset Hounds. As fate would have it, I happened upon a Basset Rescue website, and we fell in love with Willow. She had been abandoned twice before we got her in June of 2008. She's our biggest cuddler, but she's also the most destructive of our bunch when she gets left alone. 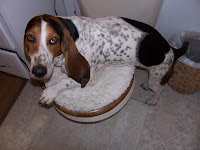 Why would we think that having children would be any different? God seems to give us things in twos. Roxie and Willow won the hearts of Tony's family while we were in Kansas -- I'm glad they were on their best behavior!

Posted by Tony and Heather at 8:07 AM No comments:

Like I said in my first post, Tony and I spent a lot of time deciding how to tell people that we're pregnant. For both of our families, it involved these t-shirts that I made: 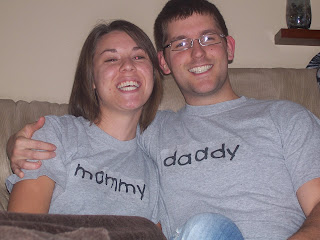 We started by e-mailing Tony's family this picture. In the e-mail, Tony said, "We're thinking about getting a 'mini-van' this summer. Take a look at the attachment and let us know what you think." Get it? Mini-VanHorn? :)

Then we wore the shirts to Phoenix for Thanksgiving, where my sister and dad picked us up at the airport. My sister noticed right away, but it took the entire drive to my sister's house and a strong hint from her before my dad even noticed! I think it's okay, because I'm pretty sure he almost fainted, so I'm glad he was done driving when he figured it out. :) When we got to the house, my grandma and mom were there to see the big news as well. (Side note: Paula posted our news on her blog recently, too, plus some photos that she took of us ... http://paulastillerphotography.blogspot.com/2008/12/congratulations-congratulations.html. Thanks Paula!)

My personal favorite was the way that I told my coworkers. In our devotion time at the beginning of the day, we have a time to share prayer requests. I said that I had a prayer request, and very seriously announced that we had discovered a growth in my abdomen. I really wanted to draw it out as long as I could, but I noticed that the coworker sitting next to me already had tears in her eyes for my "medical problem", so I quickly added, "we're going to give it about 9 months, and it should just pass naturally". Terrible, huh? I couldn't resist.

For other people, Tony and I had to come up with ways to tell them individually. Two of my sisters got a card with our big news on the inside. A lot of other people got calls from us, and Tony was way better than me at telling people in fun ways over the phone. ("Remember your theory about when we get a dog, we'll get pregnant? Well, we got two dogs ... so we're having twins!")

We had so much fun telling all of you! Maybe at our next ultrasound, we'll find triplets ... and we can tell you again!
Posted by Tony and Heather at 4:22 PM

I want to keep everybody updated as much as I can, so I didn't think it was fair to let you think that I'm still as sick as I was a couple of posts ago. I'm still sick, that's for sure, but I went a couple of days without throwing up, and yesterday I worked my first full work day in at least two weeks.

I'll share a story that you moms will probably relate to and be amused by. Last night, I really wanted mashed potatoes, so Tony and I ordered to-go from Black-Eyed Pea. I think my stomach got too empty by the time the food arrived, though, because the instant that I smelled those mashed potatoes that I wanted so bad, I had to run to the bathroom. I'm not complaining though ... those mashed potatoes tasted great, even though I had to wait longer to eat them!
Posted by Tony and Heather at 7:46 AM 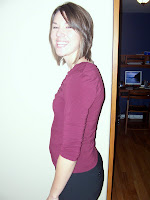 Here's the first belly picture! We can use this one as a reference point for "the way things used to be" when I get really big. I can see a difference already, but I think I'm the only one.

Tony and I want to give a big congratulations to his cousin, Brian, and his wife, Sarah. We thought we were going to have the first set of twins on Tony's side of the family, but God had other plans! Brian and Sarah just found out this week that their baby is actually babies also! And they're about 3 months ahead of us! Good luck, guys!

I don't know how bad the morning sickness was for any of the mothers who read my blog, and I'm sure some of you have had worse experiences, but I'm feeling sorry for myself and wanted to share "A Day in the Life" of myself right now. Here's looking at you, second trimester!

Isn't pregnancy wonderful? :) Also, I want to add a little disclaimer about the number of meals I eat -- I promise that I can only eat about a cup of food at a time, so rest assured that I won't gain 100 pounds with this pregnancy!
Posted by Tony and Heather at 3:44 PM 4 comments: 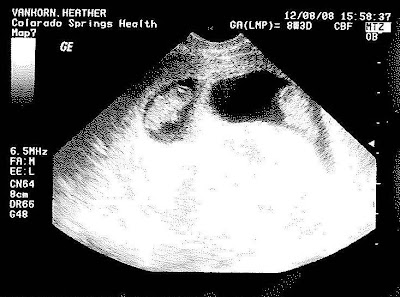 Now that we've told everybody our news, I guess it's time for the first post! I'll start at the beginning.

Tony and I found out that we were expecting on November 7th. How exciting, we thought! We're going to have a baby! We wanted to wait as long as possible to tell people, but by the third week of November I was getting sick enough to make my coworkers wonder. So we started telling people, one by one, in the most creative ways we could think of. Everybody is so excited and supportive of us!

On December 8, we had our first ultrasound. Sure enough -- there is a reason that I've been so sick during this pregnancy. Our doctor found TWO heartbeats! We had no idea, or any reason to think that we might get "lucky", but we're twice as excited now!

I'll keep you updated as we know more information. Of course, I'll include belly shots, but right now, I've only grown enough to make people wonder how much I ate for Thanksgiving. We love you all and are SO excited to share our babies with you.