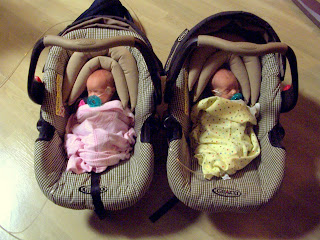 We made it! As Tony let you know in his one sentence post, the girls, Tony, and I are finally a family. We "roomed in" at the hospital for one night with the girls to make sure they would do okay, then headed home early yesterday afternoon. They're both attached to oxygen tanks indefinitely, but it's a tiny amount, and shouldn't be too long before they get off (hopefully).
It's been an adjustment being at home, to say the least ... how many of you have tried holding two babies, while cleaning up two simultaneous spit-ups, while holding two bottles, while working around two twenty foot lengths of oxygen tubing? Thank goodness for Tony! And it's just day one! :)
Posted by Tony and Heather at 11:07 AM

Guess you all had a good night of sleep???? In the pic, Leila has the pink blanket and Hadley the yellow... right?