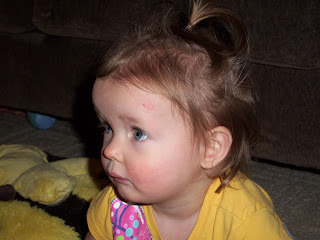 Today, I had the scariest moment of my entire life. I posted about it on Facebook, but I really want to get the whole story written down immediately, because it seems like the type of thing that might fade on me over time.
The twins and I went to a new park today. It's been nice for three days in a row, and we went to the same park for the first two days, so I wanted a change in scenery. The new park has a merry-go-round, which Hadley and Leila discovered right away. They weren't going around, just climbing on and off.
Not more than 10 minutes after we arrived, Leila stepped off the merry-go-round, barely caught her foot on a pole, and fell into the sand on her shoulder, hitting her head a little bit. I stepped to her right away since I knew she would cry. When I picked her up, I looked at her face-to-face to see if she had any scrapes. Instead of scrapes, I noticed that her eyes were rolling up into her head, and that they had turned "milky". The only way to describe what I saw in that moment is that she wasn't there anymore. She jerked, then she slumped against my shoulder. Out loud, I said, "Leila. Leila. LEILA!" In my head, I was thinking, I am watching as my greatest fear -- losing one of my twins and not the other -- is being realized. (In my head, I really do think it would be harder to lose one than both, although I'm sure that's not true.)
I ran over to the diaper bag, intending to call 911, and realized I had forgotten my phone. As I looked at the other family on the playground, wondering if I could use their phone, Leila woke up. It hadn't been more than five seconds. Her eyes cleared up, and she started crying.
I loaded the girls into the van and drove the mile home. At one point, when the car in front of me wasn't moving, I muttered, "go, go, go, go..." and Hadley echoed me from her car seat: "go, go, go, go..." Leila's own little cheering section. :) I left the girls in the car, ran inside to get my phone, ran back outside, and called my dad, who has some medical training. Once he had assured me that as long as her eyes were dilating, and she wasn't bleeding or throwing up, that she was probably fine, the relief and the tears came.
The picture is of Leila this evening. The only thing she has to show for her fall is that little scrape on her forehead. Believe me, she was as spunky as always tonight ... if not more. We're praising God for watching over us today, as He always does.
Posted by Tony and Heather at 7:01 PM

Sometimes motherhood is a terrifying thing! Until we become mothers, our primary concern is for ourselves, maybe our significant other, but mostly for ourselves. Then God entrusts this tiny, seemingly perfect, little person into our care and we have to watch him/her grow up. I envy God, that He knows His children's every step before it is taken, every choice before it is made-- He knows that everything will turn out 'all right'. But such a miracle is watching the growing and developing of our little ones that every moment of terror is worth it! So glad Leila is safe and sound-- from one mom to another-- hugs! ~M.

Who would have thought you needed to start packing smelling salts in the diaper bag :)