A Morning At The Hospital

As always, I want to keep a record of our family on the blog, so that we can reminisce about those moments when we've nearly forgotten about them. So, even though many of you who read this already know what I'm going to say, I'm going to write this for the permanent record now. 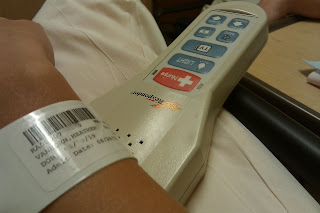 (Yes, I did blur some of this information. I have no idea what pieces would be needed to invade my privacy.) :)

I'm 30 weeks pregnant, and yesterday morning, my left hand went numb. It spread to the wrist, stayed that way for about 10 minutes, and then left. I quickly asked Dr. Google :), which said that it's not unusual for pregnant women to have nerve compression during pregnancy for a variety of reasons. So, I went on with my day -- visiting my parents at their house. While there, I started getting a migraine, which is not unusual for me. My migraines include seeing big bright spots of light before the actual pain comes, which I did get, but also dismissed as normal. I took some headache medicine and moved on. Then, about an hour later, my right arm, up to the elbow, went numb, and again stayed that way for about 10 minutes.

Since it was a weekend, I just made a mental note to call my doctor in the morning. Before I could call this morning, I started having some 'bloody show' (won't go into too many details!). So, I called right away, and based on my past 24 hours of symptoms, was directed to go to the hospital right away for monitoring. Tony came home from work, we dropped of the twins at my sister's (thanks, Becky!), I had two contractions on the way to the hospital, and that's when I lost it. I was scared to death, and unreasonably guilty, blaming myself too soon for having a body that can't carry babies full-term.

Once we got to the hospital, though, the whole tide seemed to change. (It's no coincidence that we had dozens of people praying for us by now!) I was hooked to a fetal monitor for 30 minutes, with only one small contraction during that whole time. Baby was moving normally and actively. Lastly, we had an ultrasound to look at my cervix and placenta, which both looked totally normal. (We also got to see Baby Girl's face, which was a nice little boost in our day! No pictures, though -- sorry.)

Regarding the numbness, it is probably migraine-related or pregnancy-induced carpal tunnel. It should go away after the baby comes. And nobody we talked to has an explanation for the bloody show. Just a pregnancy mystery! (And answered prayer, of course.) Thank you for your prayers and support! We're thankful to be back into "monotony".
Posted by Tony and Heather at 12:09 PM

What a scary morning! I'm so glad everything is okay. I'll be praying for an uneventful remainder of the pregnancy!

Whew! I'm glad everything went okay, and I will remember to be praying for the remainder of your pregnancy!! I Heart You!!

Glad everything is ok. We continue to pray for a smooth and healthy rest of your pregnancy. Just remember to get your rest. I know you're super busy taking care of twins, but try to put your feet up and let your body rest throughout the day. :) A well-rested mommy is a HAPPY mommy! :)