I just put the finishing touches on one wall of Marlowe's room, and I'm in love.  And not only with the little girl who sleeps in that crib.  :)

Marlowe's room is decorated in primary colors, in a style that I'm going to call "modern vintage".  The fabric on the curtains and crib skirt have a modern feel, but there's some decidedly vintage things in there, too, as you can see. 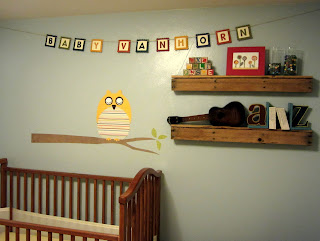 Where should I even start?  The banner at the top is from my baby shower, made by my talented sister Paula.  It said "VanHorn Baby Shower", so I just rearranged the words so that it would work in the room!

The owl was created by my mom.  She looked on Pinterest for inspiration, then drew it by hand onto scrapbook paper.  Simple and wonderful!

Tony made my fantastic pallet shelves.  Seriously, these shelves make me want jump up and down with happiness.  One free pallet + a few well-placed cuts = adorable shelves! 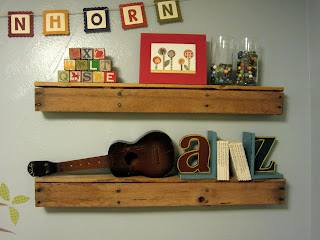 I bought the vintage blocks for a few dollars at an antique store.

My incredibly talented friend Kate gave me the flower print for my baby shower!

My dad collects marbles and gave me the ones you see, so these have extra special meaning.

The A-Z bookends were a clearance purchase at Hobby Lobby, and the books are a set by Beatrix Potter, from my mom.

Lastly, the ukulele!  (Actually, I don't know if it's a ukulele or a toy guitar, but we'll go with ukulele.)  Here's the (kind of lengthy) story: Tony's grandparents have moved from their farmhouse into the nearest town.  Since their new living arrangements are smaller than their house, we were welcomed to go through their house at Christmas and take items that we could use, or that were meaningful to us.  Tony and I took a few things, and on the way out I spotted the old farm sign that used to be posted by the road.  It was fantastically vintage, and after checking with a few people, we were told that we could take it.  So, on the way back to Colorado, we stopped quickly to pick up the sign.  Tony ran inside the house for something while I stayed in the van with the kids.  When he came back out, he was carrying the ukulele.  It doesn't have any strings, and I'm not sure it would work even if it did.  He said, "I saw this in the closet, and I thought you'd like to put it somewhere in our house."  Does this guy know me or what?  What a fantastic husband.  And he was right about the ukulele.  I had just the place for it.
Posted by Tony and Heather at 11:06 AM 1 comment:

(People tend to ask me about twins vs. singletons a lot, so I might just turn this into a series.  We'll see.) 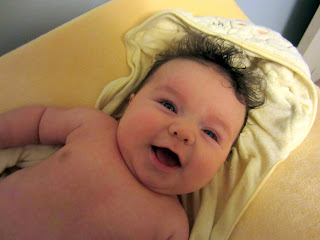 The one question that I have been asked over and over again since Marlowe's birth is, "How is it, with just one baby instead of two?"  Most of the time my answer is, "I don't have just one baby, I have three children!  I'll never get to know what just one baby is like!"

While that's true, I know what people mean when they ask me that question.  It's nice, not nursing two babies.  It's nice, not forcing Marlowe's schedule to match somebody else's so that I can have a little time to myself.  It's nice, being able to rock Marlowe for as long as I want every once in a while (twins permitting), without worrying that I'm neglecting the needs of another baby.

I think Marlowe knows that she's got center stage, too.  The one thing that I wanted with a "singleton" is the opportunity to hold her more, since I had to divide my time between the twins.  And, boy, have I gotten my wish!  Marlowe wouldn't sleep without physically touching somebody for about three weeks after she was born.  After a while, she would sleep in the swing for naps, but most of the time, Tony or I would end up with her in our arms for at least part of the night.

All of a sudden, in the last week or so, Marlowe doesn't need to be held as much.  She'll take whole naps in her crib, and she's stopped waking up in the night, except to nurse and drowsily be returned to the crib.  Before, I wondered how long it would be before she would sleep on her own.  Now that it's not needed as much, I miss it.

I still insist on rocking her to sleep at the beginning of every nap, though.  Because I can.  I might just do that until she's leaving for college.  :)

Well, this one is late, too, but at least I'm catching up!

In fact, Marlowe is such a good baby that she smiles and coos until she's exhausted, and we can't even tell that she's tired.  Then, she's so tired that she can't fall asleep and ends up crying while she tries to fall asleep.  We're getting better about catching her when she's just the right amount of sleepy, though.

Anyway, here she is at Christmas!  My little, goofy Santa Baby. 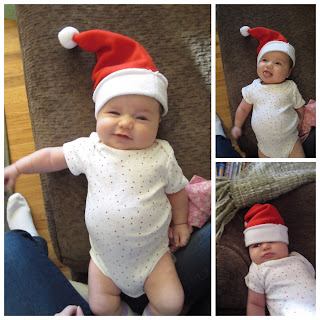 Posted by Tony and Heather at 7:26 PM No comments:

A Bushel and A Peck Art

Well, my last crafty project was well received, so I'll keep sharing with you!

This one has been completed for a while, but I accidentally cracked the glass when I was putting it together. Thankfully I have a neighbor who saves everything (the same one who gave me one of the yardsticks!), and I was able to replace the glass from their stash for free!

It started with a big frame that I bought for about $5 on clearance.  I didn't have any plans for it, but I don't see big frames for that cheap very often (it's 16" x 20").  It sat for a while before I decided what to do with it.  Then, I was reminded of this song that we used to sing when I was a kid ... and the brainstorming began.  Since I don't have a Cricut (*sigh*), I described my idea to my sister and she cut out the circles and letters for me, which I arranged on white paper.  And here's the finished product: 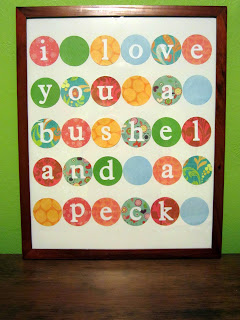 It has taken it's place on the wall in the twins' room.  It was a little hard to get a good shot with the picture on the wall, but here's one: 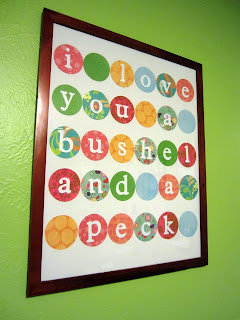 Falling in Leaf With You

I'm a little late with this one -- the pictures were taken in mid-November -- but they're cute enough (to me, anyway) that I wanted to post them.  Maybe it's a good reminder for all of us to get outside and act like kids every once in a while.  :) 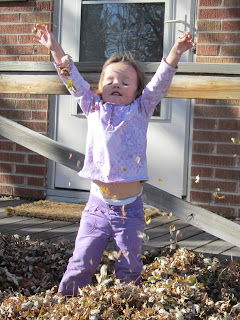 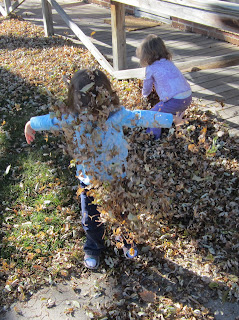 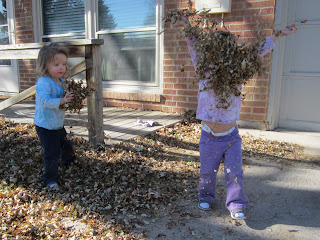 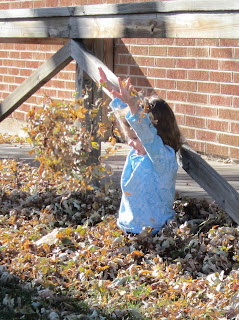 I haven't always considered myself to be "crafty".  I'm from a family of ridiculously talented crafters (Postscripts, for example), and on that totem pole, I'm pretty low.  And as long as I'm being honest, Pinterest is my major source of help for getting from an idea in my head to actual reality.  But, since I stay at home, I've realized that I need an outlet to give my mind something other than kids to think about every once in a while.  And, I'm in a craft group!  (Hi, Chi Gamma!) :)

So, starting now, I'm going to post my finished projects more often.  Here's one that just went on the wall today, and I am giddy about it.

Not only are the yardsticks fabulously vintage, but they also have special meaning to our family.  I collected them from my dear next door neighbor and both of Tony's sets of grandparents.

Also, I used metal brackets and a metal stamping set to create these cute little name plates for each hanger.  (Tony and I joked that we can't have any more kids now!)  :)  They're not perfect, but I think it adds to the charm. 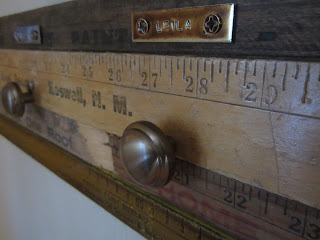 We don't have much room in our little house for a coat rack, so this meets our needs perfectly.  And yes, my purse is hanging on the hook that's labeled with my name.  :) 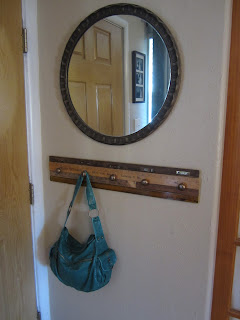