Tony and I have been using every spare minute to prepare our house for sale.  It goes on the market next week!  I'd like to think that we're clean and organized people, so I can't imagine what this process is like for people who aren't clean and organized.  Although, having three kids under three definitely hinders those qualities.  :)

Hadley and Leila are still my little bundles of energy.  We converted their beds into bunk beds and they LOVE it.  It also means they can't pick on each other before they fall asleep.  :)  (By the way, I've had a few pictures of bedtime on here recently, and you'll notice the red on their faces.  We're using three different prescription creams on their eczema before bedtime, and hopefully we're getting closer to a long-term solution that doesn't involve prescriptions.) 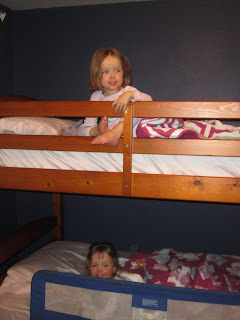 Speaking of sleeping, Marlowe has been sleeping through the night for a few weeks now!  Sometimes she still needs a little TLC, but she's not nursing in the night anymore, and that's nice.  (Let's be honest ... nursing one baby in the middle of the night is nothing, compared to nursing two babies in the middle of the night.  So getting up with her usually didn't bother me.)  She's also >thisclose< to sitting up and rolling over back-to-front.  So much fun! 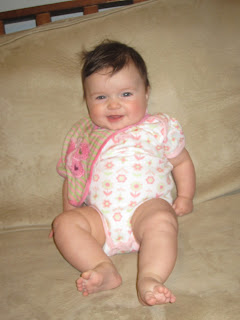 And just in case you're not on Facebook, here's our family at Easter.  I made the dresses for the girls, using this tutorial.  Aren't they adorable?  (The girls AND the dresses!) 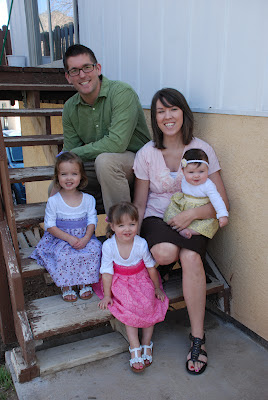 Posted by Tony and Heather at 12:50 PM No comments: