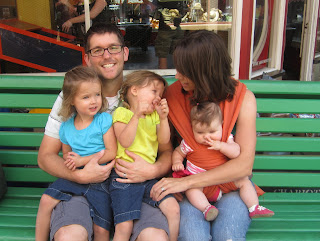 A month or two ago, I helped my cousin assemble her wedding invitations.  While we chatted and glued, the topic of twins came up, as it often does in conversations with me.  I mentioned that I was thankful for having twins first, because it made me embrace parenthood in a way that I never would have anticipated (which I'll explain below).  She replied, "You're right -- I honestly didn't think you would ever have children!"

Now, to be fair, her statement comes from having known me when I shaved my head, and later, when I had five earrings in each ear, had my belly button pierced, and dated a new boy every month.  It was a short, hard phase, and not truly indicative of who I am on the inside.  I don't think my parents have ever been more relieved than when I attended a Christian college, took out my piercings, and started dating a boy named Tony VanHorn.  :)

But the statement itself still holds some truth.  I'm not the most maternal person.  I didn't dream of being a mother when I was a little girl.  When Tony and I got married, we knew that we wanted children, but maybe just two.  We didn't say it out loud, but the bottom line was that we didn't want to change our lives for children.

Then, we saw two little blobs on that first ultrasound.  Bed rest for five weeks.  Delivering twins, one vaginally and one by c-section, six weeks early.  The NICU for sixteen days.  Becoming a stay-at-home mom to premature twins who stayed on oxygen for eight weeks.  Exclusively breastfeeding.  Punching the mattress because both babies were crying and I couldn't make them stop.  Leaving dinner parties early because both of the babies were fussy.  Deciding to not leave the house during the day unless absolutely necessary for a few months, because it was just too hard.  Being the mom who couldn't sit down and chat with friends during play dates, because managing the twins took all of my time.  Watching my friends without children stare at us while we desperately tried to pull ourselves together.

Changing our lives for children was going to happen, whether we wanted it to or not.

If there was ever an excuse to stick to our "two children" resolve, twins was it.  It's the hardest thing I've ever done.  I spent the first year (or more) of the twins' lives feeling out of control almost all of the time.  By having twins first, changes in my life happened that I wouldn't have chosen and had no control over.

Something else also happened.  The changes that I didn't choose, even resisted, made me a better person.  I had no choice but to give up my selfishness, my pride, my control.  In their place, instead of resentment, I've been given  love, patience, and enjoyment.  And, Tony and I reasoned, if we have all of these things with two children, why not have more?  And so, Miss Marlowe was born.  And all of those good things have multiplied.  In fact, believe it or not, life has gotten easier.

During my pregnancy with Marlowe, I swore that she would be our last.  Seeing her and falling completely in love with her made me take that statement back.  So, we don't know how many children we will have.  We may have three or thirty.  Our life is still chaos, and probably will be for a long time.  My enjoyment may not be obvious when you see me on the street.  :)  But I can tell you, honestly, that I love and enjoy being a mother to my three kiddos.  And that's something that even I didn't expect to see in myself.
Posted by Tony and Heather at 12:29 PM