Let's take a moment to mourn the loss of my stomach muscles, shall we? 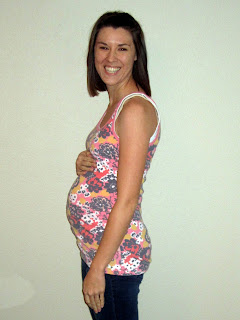 And, just for fun, let's take a look at my other two pregnancies.  Not great photos, but they'll do. 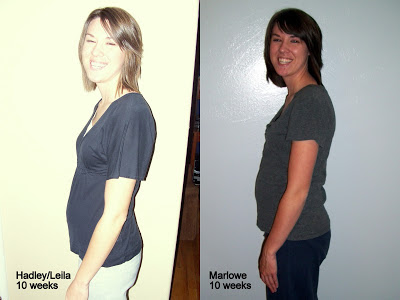 And I actually weighed less at the beginning of this pregnancy than I did with either of the other ones.  I guess carrying 10.5 lbs of twins in 2009, then 9 lbs of one baby in 2011, then getting pregnant again in 2013 *might* take a toll on one's body.  Out of pride, I almost nixed the idea of posting belly pictures this time.  But, I figured, my belly reaches nearly unbelievable proportions anyway ... so let's see how ridiculously huge I can get this time.  It'll be like a game.  :)

By the way, since it's Valentine's Day, I'll brag on my hubby a little bit.  He surprised me by arranging for babysitting and taking a long lunch break.  When we got in the car, he told me that he wanted to drive to Denver so that I could eat at Spicy Pickle -- a huge pregnancy craving of mine and one of my favorite restaurants.  I didn't think my morning sickness could handle the drive, so we settled on a local Mexican restaurant and a trip to the grocery store for Oreos.  :)  Ah, true love.  He's the best.

And, if you need a chuckle, here's the other two pictures I took tonight.  :) 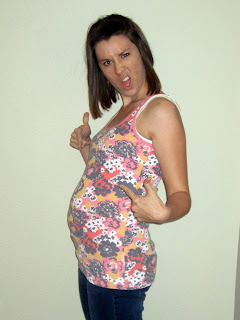 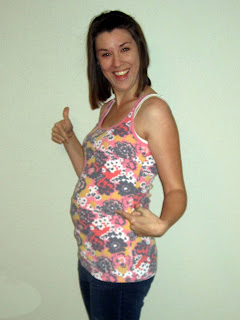 By now, most of you know that I'm 8 weeks pregnant with our fourth child.  And if you didn't know that, surprise!  You can catch up by watching this video:


We had our first ultrasound on my birthday (which was my choice, a fun birthday treat!), and also posted this video on Facebook on the same day.

But, today, I want to start at the beginning.  The part where we reached the decision to have another baby.  As I wrote in this post about unexpectedly enjoying parenting, when I was pregnant with Marlowe, we firmly decided that she would be our last child.  (Although Tony always just shook his head and said, "Okay, Heaz..." but that's beside the point.)  And, honestly, my pregnancy with her was totally selfish.  I needed a singleton pregnancy, with no bed rest, no premature labor, no NICU.  The baby at the end was a bonus.

Eight months after Marlowe, we were participating in a family garage sale.  We have boxes and boxes of baby girl clothing in the garage, and I thought it would be nice to sell what Marlowe had outgrown.  After all, we weren't going to use it again, so there was no reason to keep it.  But I stood in the garage, staring at those boxes, and without even touching them, I turned around and walked back inside.

I went to Tony.  I told him about what happened in the garage.  I said that I wanted to make a decision about whether to sell those clothes, and that I wanted him to be the full decision maker.  I would be totally on board with whatever direction he wanted to take.  (And I would have been!) He said that he would take some time to think and pray about it.

About a week went by.  With the garage sale looming (please don't judge me for using a garage sale to time life-changing conversations), I asked Tony if he was ready to talk. Here's what he said (to the best of my memory):

"I don't feel like I, or we, have the right to close the door on having children now.  God has blessed us with three amazing daughters, and I can't come up with one reason that we shouldn't have any more."

You should have seen my eyes light up.  Until that moment, I didn't know how much I was hoping that he would say something like that.  I didn't even know that I wanted it.

And, as they say, the rest is history.

Tony (and I) could have used all sorts of excuses to not have more children.  Money.  Career ambitions.  Imperfection as parents.  Cultural expectations. On and on.  I'm so thankful that we were able to see through that haze and let God change our hearts.  And I am grateful to the point of not having words that I'm married to Tony. We never would have guessed that our life together would go in this direction, and I've never seen him flinch.

We aren't rich.  We aren't perfect.  But we love God, our children, and each other, and we're taking things one step at a time.
Posted by Tony and Heather at 3:22 PM 2 comments: