I haven't done much blogging since Cecily was born.  I've only published eight posts in the last four months, and almost all of them were picture posts without much writing.

Here's the reason: I have four children.  The last four months have been some of the most demanding months that I've experienced in my life.  And I lived through the first year with twins, so that's saying something!

People say that your fourth baby just "knows" to be easy because you have other children to take care of.  That's wishful thinking.  Cecily didn't have any health problems, thankfully, and I wouldn't even call her a hard baby.  Actually she's a sweet, sweet baby with bright, clear eyes that connect with everybody.  She just wanted to be held.  And held. And HELD.  Especially while she was sleeping.  And you know newborns sleep like 20 hours a day, right?  So, I spent the first six weeks of her life holding her.  In my arms, in the baby carrier, in bed, and then when Tony came home from work, he would give me a break.  He would rock her for hours so that I could get a solid few hours of sleep.  After six weeks (and a mental breakdown from me), we found a swing that she liked -- not as much as our arms, but it worked well enough to give me a break. 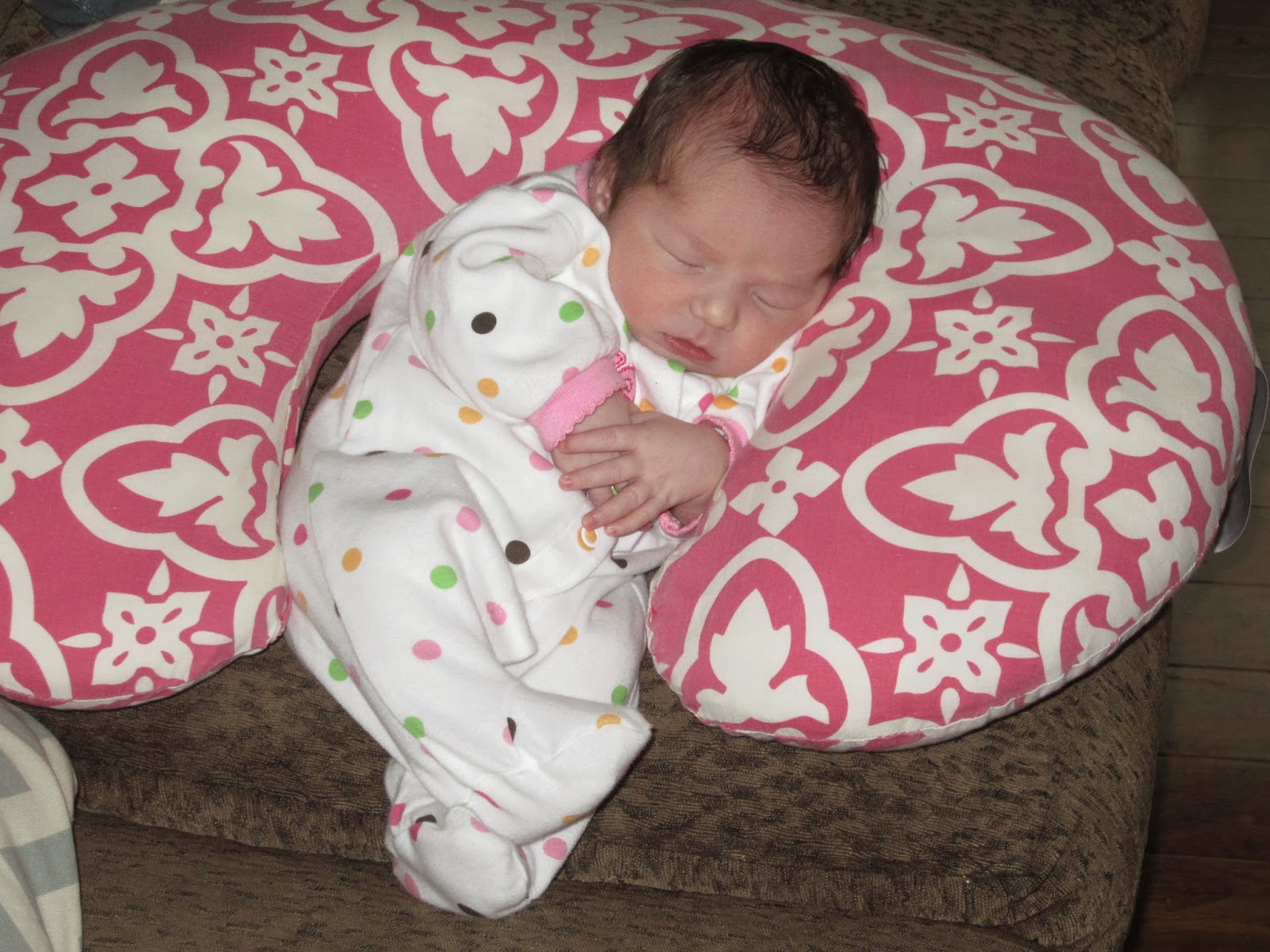 Don't let her fool you -- she probably woke up one minute after this picture was taken.  :)

Nights were interesting, too.  You know how newborns wake up to eat and then blissfully nurse to sleep?  Not Cecily.  She would wake up to eat, finish eating, then just stay awake.  I would sometimes try to rock her back to sleep for an hour, then wake up Tony to rock her some more, so that I could get an hour or two of sleep before she needed to eat again.  She was so sweet the whole time!  Little stinker.  ;)

I think what pained me the most during this time was the loss of time and physical touch with the other girls.  I was so exhausted that my parenting skills (what little there was to begin with, ha!) went right out the window.  The television babysat them more than I wanted it to.  I made a conscious decision not to discipline when they should have been disciplined because I was holding the baby and didn't want to wake her up.  When I wasn't holding Cecily, I was rushing to shower/cook/eat/clean before she needed me again, not spending time with the big girls like I wanted. 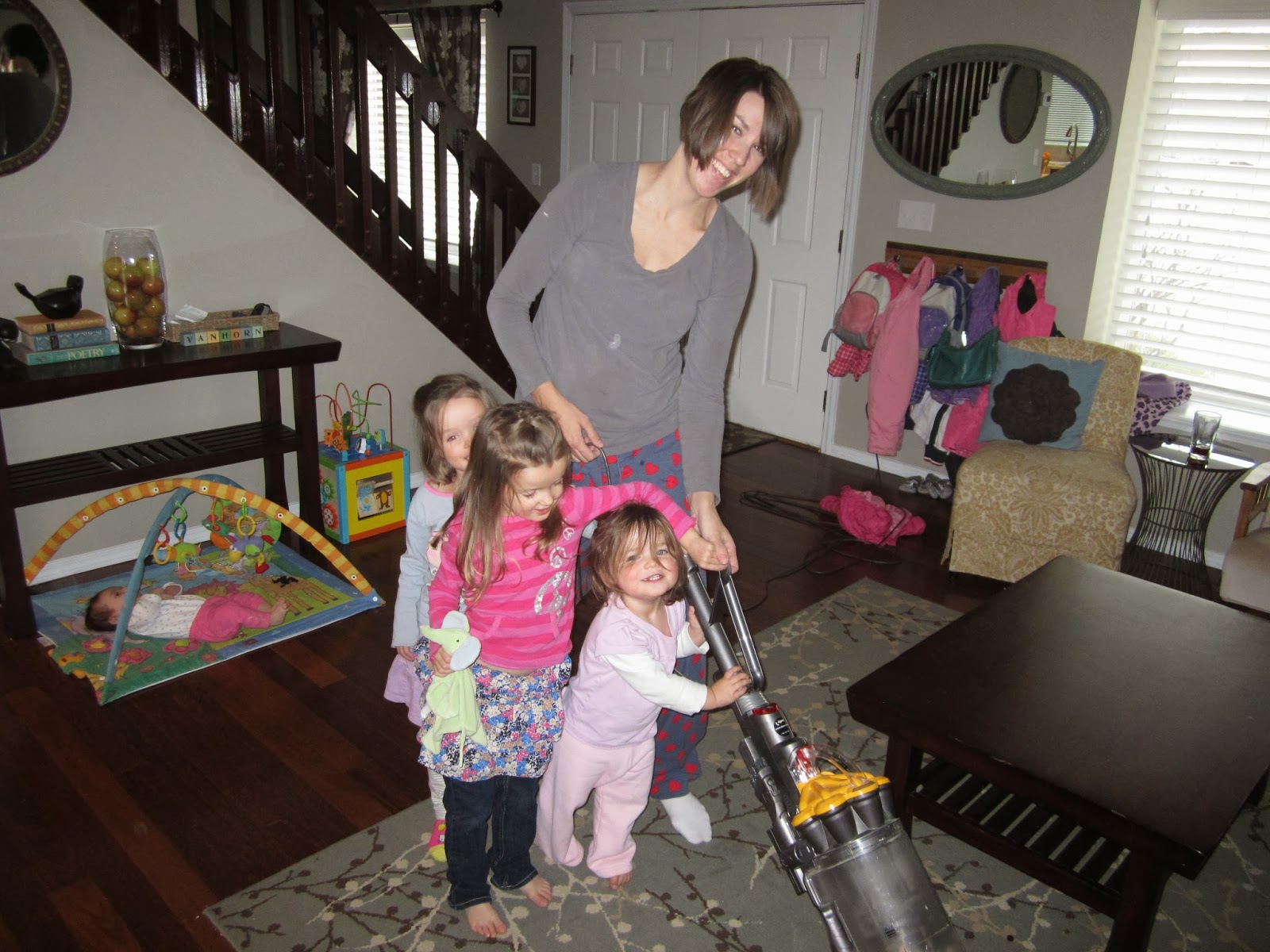 I think constantly holding Cecily affected Marlowe the most.  The forgotten middle child.  (Except that she won't let herself be forgotten!) Really, she's a normal two-year-old, with everything that goes with that, but she became very independent when I wasn't available for her all the time.  I have the scribbles on the furniture, bent curtain rods and droopy curtains, and stains on the carpet to prove it! 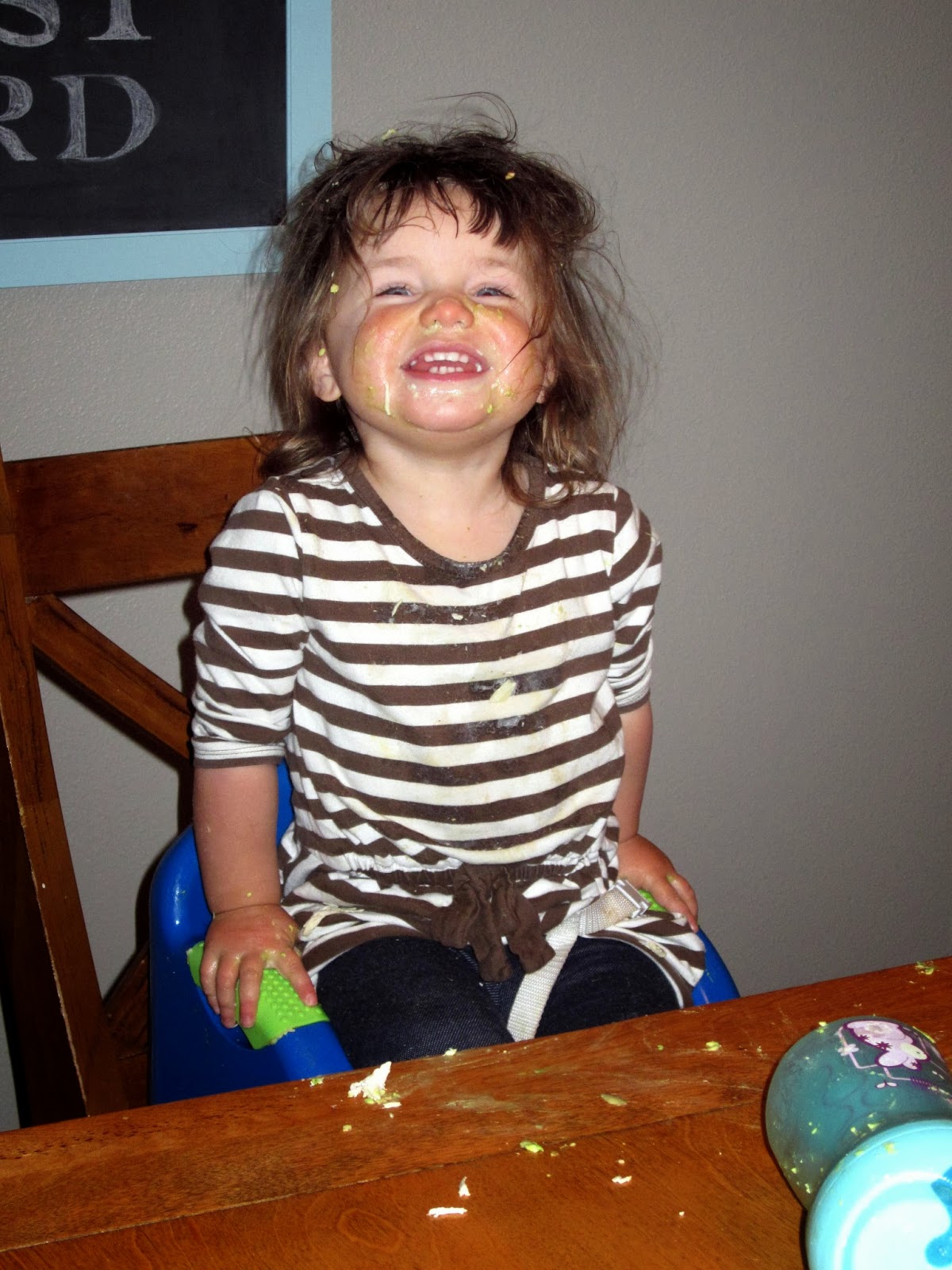 Hadley and Leila started preschool exactly one day after Cecily was born.  Of course I didn't take them the first day, but it wasn't long before our post-baby help was gone and I had to handle things on my own.  At our preschool, you have to walk your child to the classroom door.  And Cecily hated her car seat, because she wasn't being held.  So, preschool drop-off looked like this: drive to school with baby screaming, park, unload huge stroller, put screaming baby into stroller, buckle wiggly toddler into stroller, make sure preschoolers have coats and backpacks, walk with all four kids into school, wait for the classroom door to open while baby screams and toddler rips things off the wall and preschoolers ask a hundred questions, wave goodbye to preschoolers, walk out of the school, unload the wiggly toddler, unload the screaming baby, put away the huge stroller, drive home with baby screaming, repeat after 2.5 hours for pick-up, except add a toddler who had to be woken from her nap. 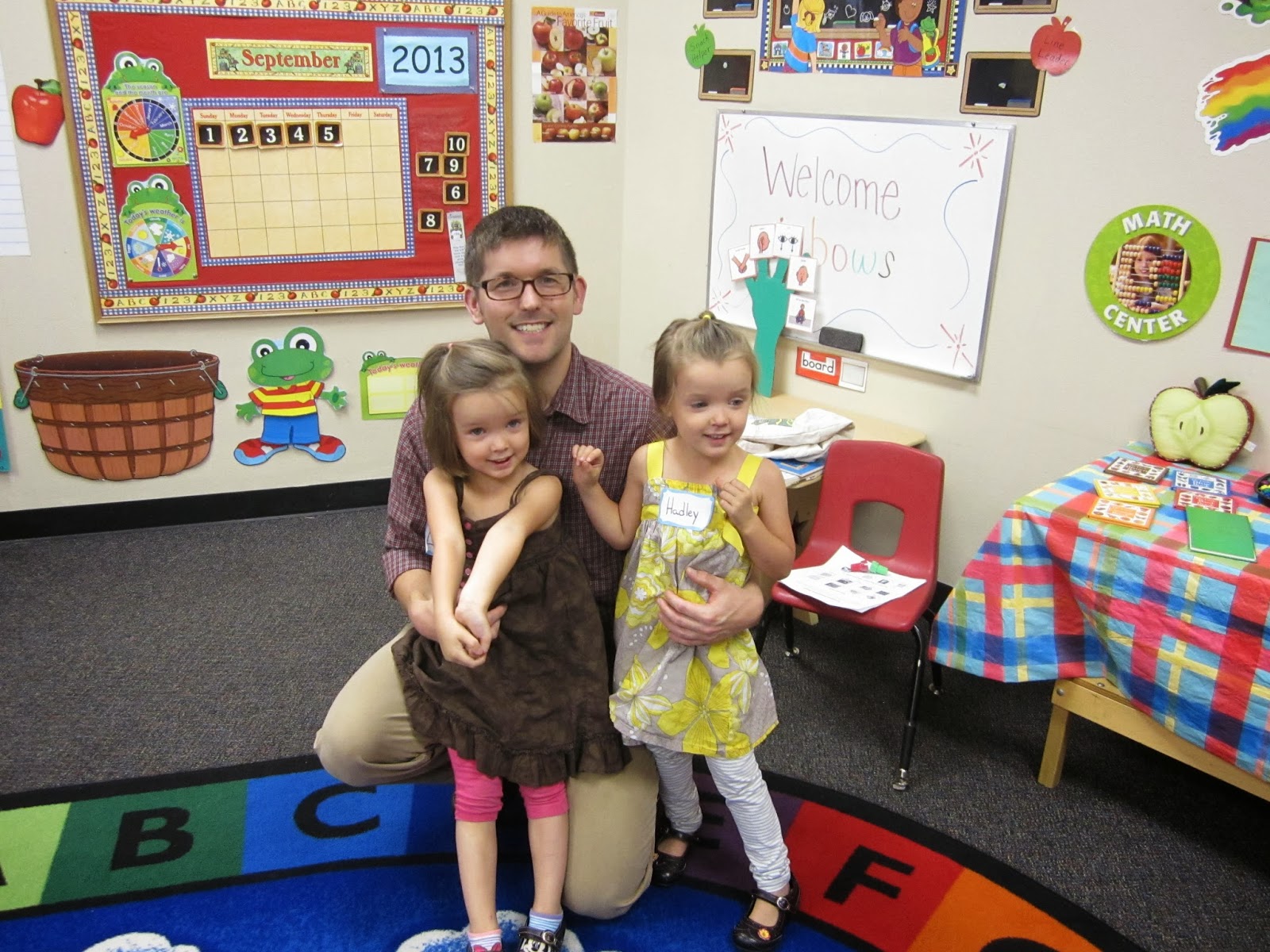 The good news about preschool is that once again, Tony came to the rescue.  It didn't take very long for him to realize that I just couldn't handle it.  He started working from home on Tuesday and Thursday afternoons.  I still take all four of the kids to drop-off (and thankfully Cecily outgrew that terrible car seat phase!), but I can let the little girls sleep while I go pick the big girls up by myself.

Then, one fateful day, just after Christmas, I decided to try putting Cecily in her bassinet for her nap.  I had tried and failed several times before.  But this time, she slept.  And she took the next nap in there, too.  And the next one.  And now it's been a few weeks.  Sometimes she needs a little extra care, sometimes she loses her pacifier, but overall, that phase of her life is over.  Life is still demanding, and I'm still not perfect, though.

It's crazy -- going through the last four months was the longest, hardest thing, but now that it's done, it wasn't that long.  And I even miss newborn Cecily a little bit.  Go figure. 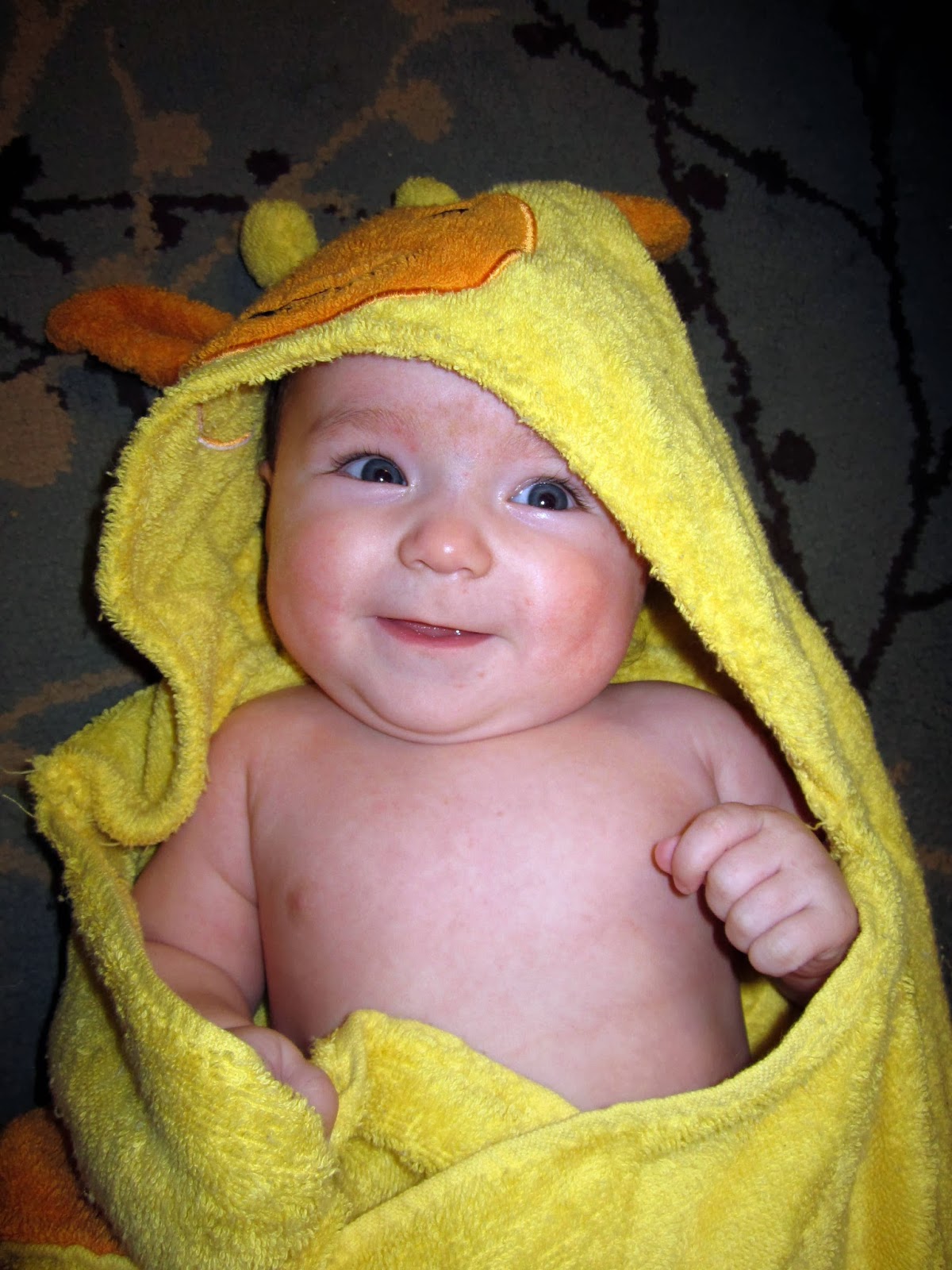