Reasons Why My Baby Is Too Distracted To Nurse 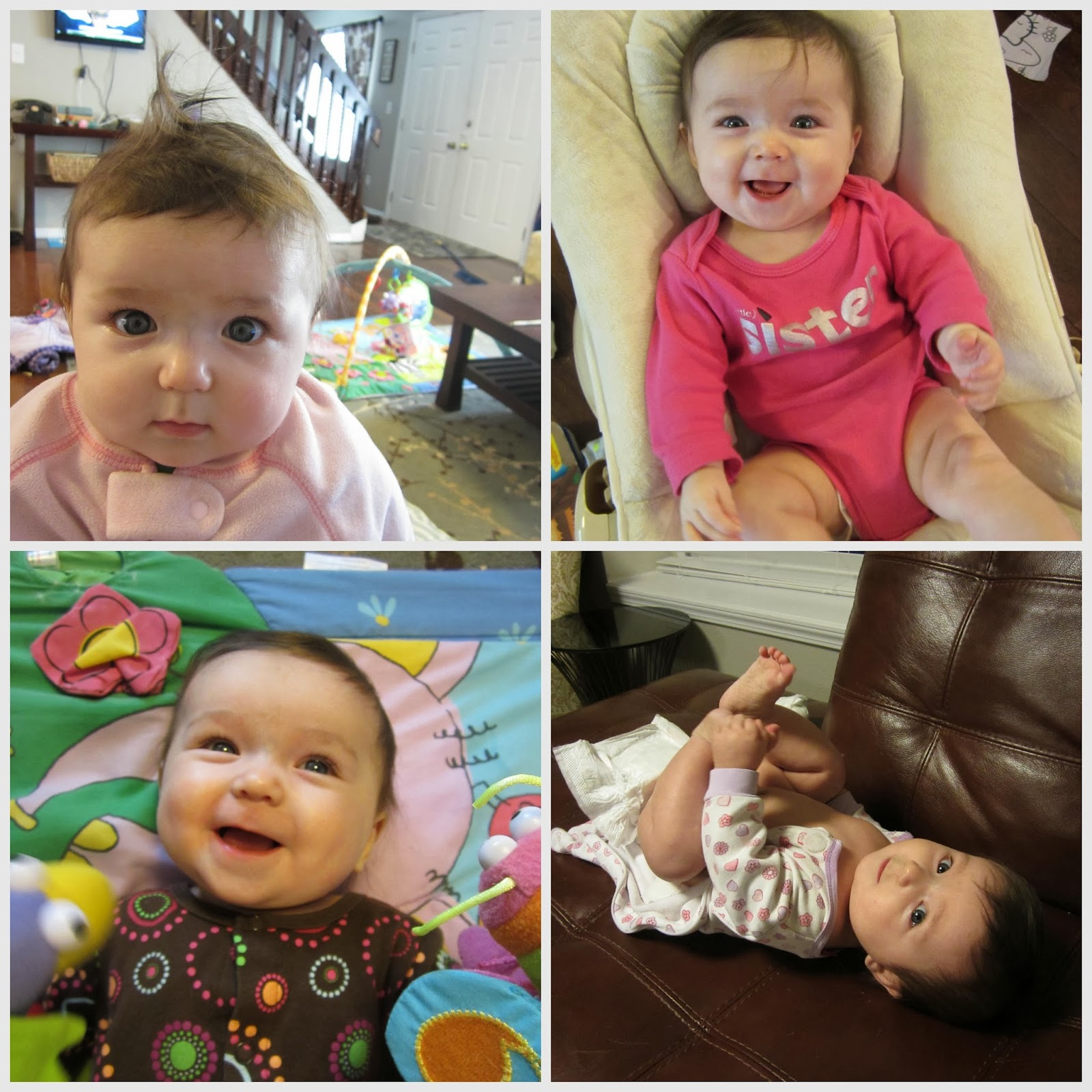 My first breastfeeding experiences were fairly easy.  With the twins, the initial learning curve was hard -- for me and for them, since they were too small to nurse effectively at first.  (And there were two of them!)  But once we got it figured out, we didn't look back.  Marlowe was born hungry and hasn't stopped eating since.  :)  But Cecily is a different baby.  The nerve -- having different needs when you're a fourth child!  :)  She nurses easily, but she's just not very interested in eating sometimes.  I finally figured out that she likes to be alone in a quiet room when she eats, and that works well for us.  But until I figured that out ... well, here's my list of "reasons why my baby is too distracted to nurse".  True story.
Don't let her fool you, though -- she's near the top of the growth chart for height and weight, so we're doing something right.  :)
Posted by Tony and Heather at 10:17 AM 1 comment:

Another Decade, Another Milestone

Seems like I've been hitting lots of milestones lately.  Tony and I have been together for ten years, we found out we were having twins five years ago, and I've been blogging for five years.  We're coming up on the ten year anniversary of our engagement, and next year we'll have our tenth wedding anniversary.  I love milestones!  It makes me happy to reflect on past years and incredulously wonder where the time went.

A couple of weeks ago, it was especially exciting for me to have my 30th birthday on January 30th.  My golden birthday on a milestone birthday, how fun!  (Speaking of milestones, four of us have had our golden birthdays in the last 15 months.  Couldn't have planned that if we tried!)  My entire day (and the days surrounding it) were filled with family and friends, and I felt so loved as I entered my fourth decade.  (Felt a little weird to type that part about the fourth decade, though ...)

Here's something you might not have known about me: I was the 1984 New Year's Baby in Philipsburg, Montana.  In that little town, they had to wait almost a month into the new year to get their first baby of 1984!  I just rediscovered this newspaper article from my birth.  My dad says he's happy to have his own basketball team ... and I didn't play much basketball.  In the newsletter that is attached to this article (I didn't scan it) he says that he was a little disappointed that he didn't get a boy after four girls.  Sorry, Dad.  :) 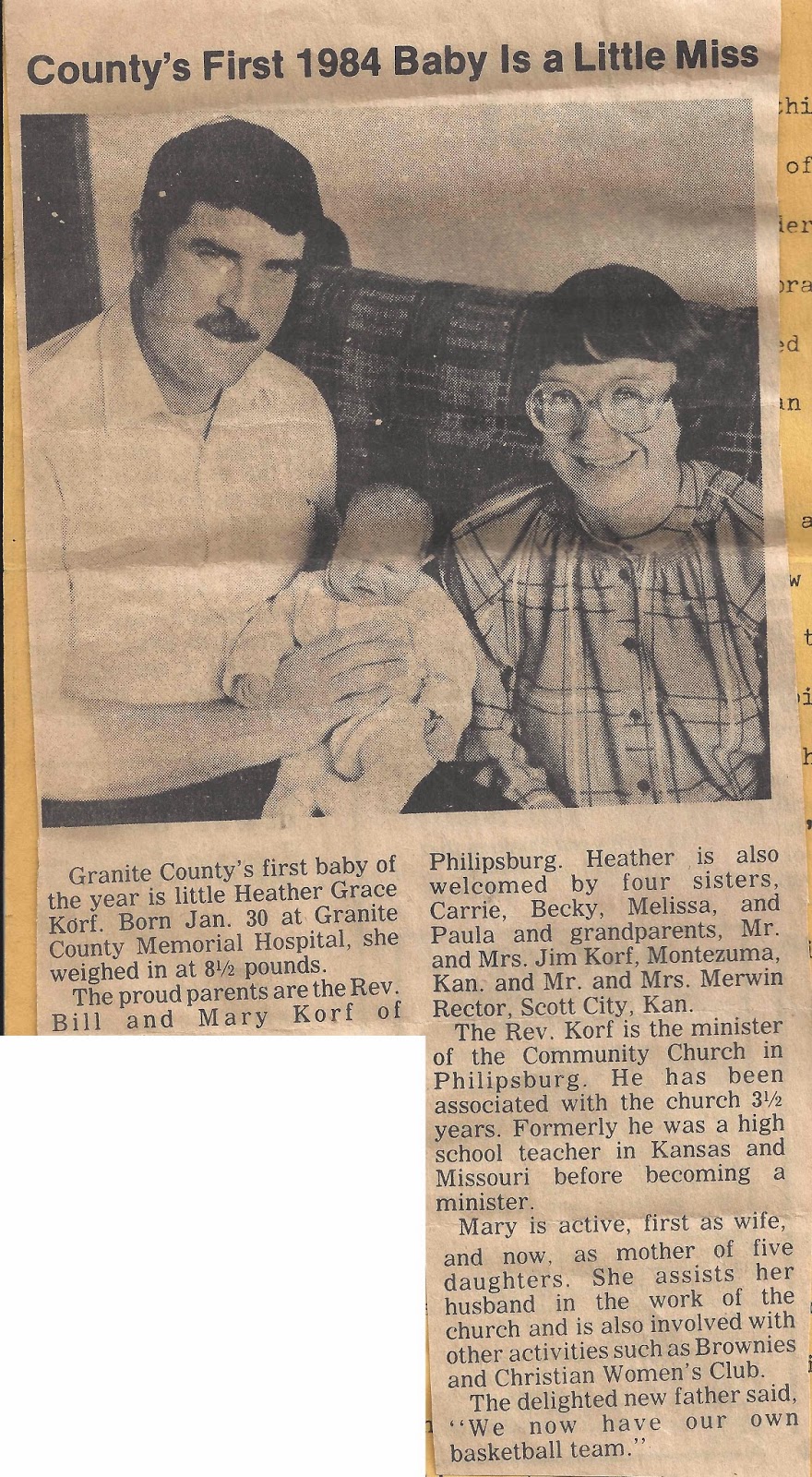 Anyway, 30 has been an easy transition for me.  I couldn't have asked for a better 20's decade, really!  I got married, graduated from college, had a career, traveled personally and professionally, purchased two homes (and sold one), became a mother FOUR times, and became a stay-at-home mom.  What more could I ask for?

Of course, those are all minor worldly "achievements".  More importantly, I've grown as a follower of Christ.  I'm so thankful for years of knowing God, His abundance of blessings on me and my family, and I can't wait to see what the next decade's blessings are.

Posted by Tony and Heather at 3:43 PM No comments: