Today is our nine year wedding anniversary.  Happy Anniversary to us!  Which means, there's no time like today to share, for the first time in writing, the adventures of our wedding night.

March 25, 2005 was the first day of spring break from college.  It was also Good Friday.  We hoped that our Colorado wedding would be spring-like weather, but snow started falling sometime during our wedding day.  Which was fine, because we got to take lovely pictures like this one! 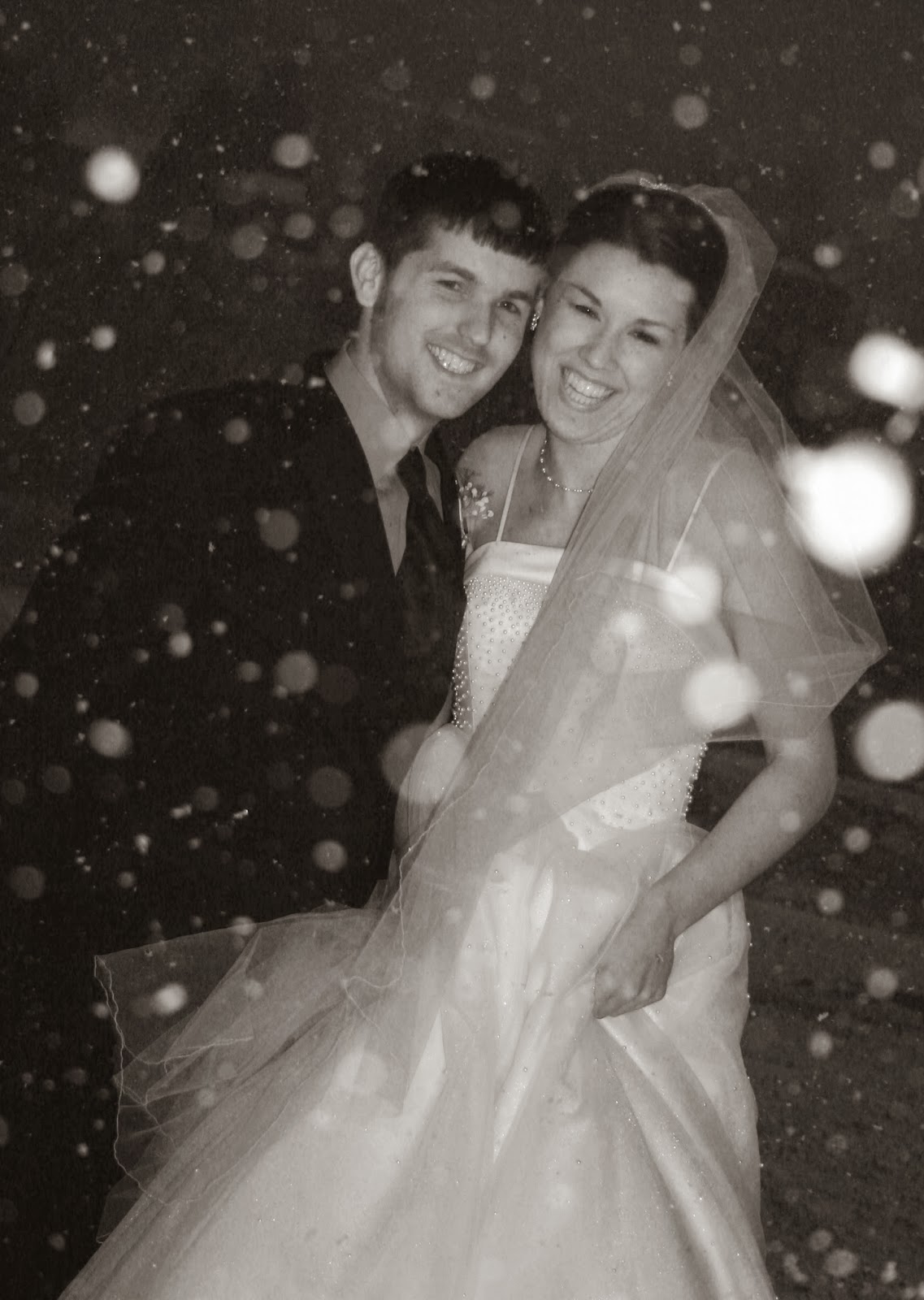 The wedding was at 7 p.m. with a reception following, then we had rented a cabin for one night, near Cripple Creek, so that we could be closer to the Denver airport, where we would depart for our honeymoon the following morning.  By the time our reception started, the snow was falling so heavily that we decided to leave the reception early in order to get to the cabin before the storm got worse, with apologies to our wonderful wedding guests, of course!

So, we got in Tony's purple Dodge Stratus and drove toward the cabin.  And thanks to horrible directions from the cabin rental business, non-existent cell phone reception, and the snow, we found ourselves hopelessly lost at 11 p.m.  On a dirt road.  In a snow storm.  In a 4-door sedan.  Tony decided to make a u-turn and head back to the highway.  We turned around ... and got stuck in the snow on the shoulder of the road.

So, we tried to dig ourselves out.  Did I mention that I was wearing a knee-length spaghetti-strap dress?  So, really, Tony tried to dig us out while I dug in my suitcase for jeans and shoes.  After realizing that we weren't going to get out by ourselves, we decided that we had to walk for help.  We walked up the hill, about a quarter mile, to the nearest house.  By now it was close to midnight, and we worried that nobody in the nearby cabin would be awake, but thankfully, the lights were on.  A man answered the door and generously offered to pull our car out of the snow with his truck.

After he pulled the car out, we asked him if he could give us directions to the cabin.  He pulled out a HUGE detailed map of the area,, and he couldn't find any of the roads from our directions on his map.  Instead of trying to find it, we decided to find a hotel.  To this day, we don't know if that cabin actually existed.

Back on the highway, we headed toward the nearest town to find a hotel.  Except that tiny town didn't have a hotel.  And neither did the next one.  Finally, we entered Woodland Park at about 1 a.m.  Somewhere along the way, I had fallen asleep, and Tony drove past the only hotel in town without realizing it until he had missed the turn.  He decided to make a quick u-turn to get back to the hotel.

(The moral of this story?  U-turns and Tony do not get along.)

I woke up just as he started to make the turn.  In the middle of the u-turn, Tony realized that there was a raised median dividing the two lanes of traffic.  Unfortunately, there was a car coming toward us, so he had no choice but to jump the median so that we didn't get hit.  And the car that was coming toward us?  Yep.  A cop.

So, on our wedding night, after getting lost, getting stuck in the snow, hiking in the snow for help, asking a complete stranger to help us in the middle of the night, and finally finding a hotel after never finding the cabin, we got pulled over.

I begged Tony to tell the policeman what had happened.  He said that if the cop decided to give him a ticket, he deserved it, so he didn't say anything.  Thankfully, he was just given a warning.

Beyond exhausted, we pulled into the hotel parking lot, rented a room, and got exactly three hours of sleep before we had to get up to go to the airport.  The snow had stopped.  And through all the events of our wedding night, we managed not to argue or get frustrated with each other.  Maybe going through those events are our secret to nine years of success.  :)