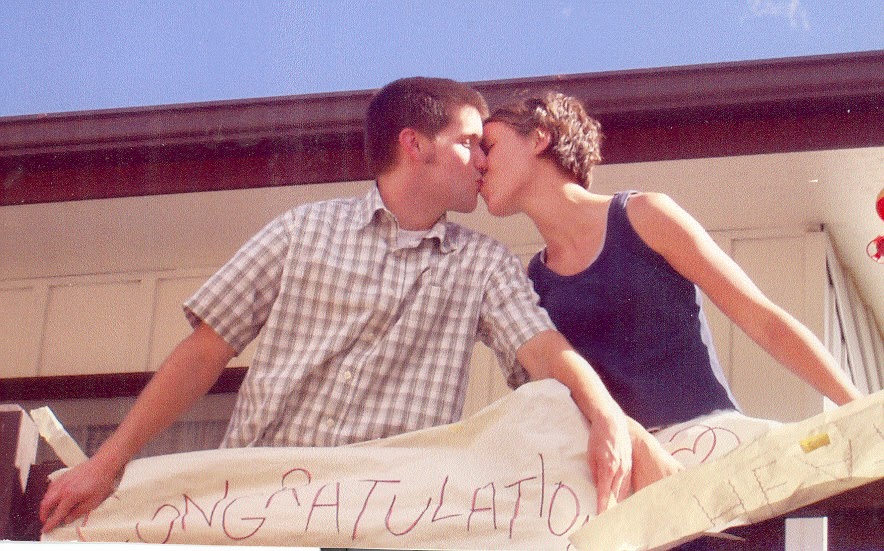 Today is the tenth anniversary of the day that Tony proposed to me!  (I think I mentioned before that we couldn't remember what day it was.  Thankfully, my mom keeps a diary and looked it up.)  This weekend, we are looking forward to leaving the kids with my parents and going back to the same exact place where he proposed, for dinner.

Tony and I have had a lot of entertaining stories in our lives together, and our engagement is no exception.  Though, in this case, I am the one who is entirely to blame for having anything other than a typical one-knee-she-said-yes story.

On July 26, 2004, Tony drove from Kansas to Colorado to attend the wedding of his college friend, Wes.  (I was living in Kansas City and didn't join him.)  After the wedding, he drove another 3.5 hours to my parents' house, and stayed the night.  I wasn't told what kind of conversations had happened during his stay, but I knew that no boyfriend would drive 3.5 hours out of his way just to say hello to his girlfriend's parents.

Apparently, the assumption that he had gotten my Dad's blessing started some sort of ridiculously unreasonable countdown clock for me.  We saw each other once after that, probably a week after Tony talked to my parents, and I had a terrible time.  I wondered if every place was THE place and prepared my response accordingly.  I wondered if he had the ring, and if so, did he pick a good one?  I was on edge practically the whole time, trying to act like nothing was different.

Well, he didn't have the ring, and he didn't propose.  I finished my job in Kansas City and went to spend a couple of weeks with my parents before going back to college.

There are a couple of side stories that I wasn't aware of at the time.  At this point, Tony had ordered the ring and was waiting for it to arrive.  He had chosen the marquise cut.  While researching diamond cuts online, he found a website that matched shapes to personality types.  According to the website, the personality matched with the marquise was "dramatic" and "opinionated" and "fiery".  Then, when Tony went to pick up the ring, he locked his keys in the car and had to have a friend come rescue him.  Yeah, he probably should have just walked away while he was ahead ... :)

So, on the weekend of August 7th, Tony drove to Colorado again to spend a weekend with me.  He had the ring hidden safely in his car.  Since he wasn't familiar with the area, he didn't have plans about where exactly he would propose, but knew that he would do it that weekend.  On Saturday night, we drove to Salida for a date.  We ended up at a coffee shop called Bongo Billy's.  We ordered coffee and wandered out to the riverside deck.  Because there was a band playing inside, the deck was empty except for us.  We could see the mountain near town, and the usual white "S" had been replaced with a glowing red heart.

Tony quickly realized that this was the perfect place to propose.  All he had to do was figure out a way to go back to the car for the ring without making me suspicious.

I also quickly realized that this was the perfect place to propose.  But I also remembered how terrible our previous time together had been, with me constantly wondering, and never being able to just be in the moment.  Instead of waiting patiently and demurely for whenever he decided to propose (you know, like a normal human being), I thought sharing my anxiety would help me relax.  After all, it had only been two weeks since he talked to my parents; surely my expectations were too high, and he wasn't going to ask that night.

"So, I need you to know that I've been expecting you to propose for a couple of weeks now.   Every time we go someplace romantic, I wonder if it's going to be the place, and then it isn't, and I get disappointed.  Basically, any time we go anywhere, I'm going to be wondering if it's the time and the place.  And I just needed to tell you that because I really want to enjoy tonight without constantly wondering when you're going to do it."

Alone on the deck, I felt horrible.  I sat hunched over with my face in my hands.  I wasn't letting my (hopefully) future husband have control over the thing that he was supposed to have control over.  I didn't even know where he had gone or when he would come back. Five of the longest minutes of my life passed by.

Then, I saw him climb back up the stairs to the deck.  He walked over to me, pulled out the ring box, and got down on one knee.  Instead of feeling joy, I felt ashamed.  I told him that he could wait for another time.  He replied, "It doesn't matter to me how or when I propose, as long as we get married."  He actually had to convince me that this was something he had been planning to do that night, not something that I had forced him to do. In the end, of course, I said yes.

Over the next weeks/months/years, my guilt about ruining his perfect proposal opportunity came and went.  I felt sad that we didn't have a perfectly romantic engagement story to share with our kids and grandkids.  I wondered if Tony would have proposed at all if he had known that I was going to open my big mouth. But every time I started to feel bad, I remembered something: Tony picked the ring shape for somebody "dramatic" and "opinionated" and "fiery".  He knew who he was proposing to, long before he actually did it.  And, boy, am I glad he took that risk. 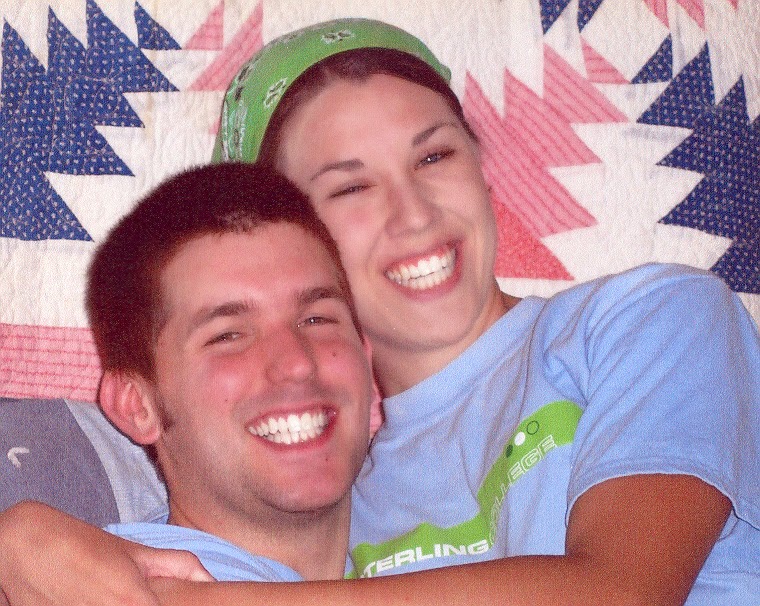 This is the morning after the proposal. This is our "what did I just get into???" faces.  I think Tony's face might have a little bit of actual panic. ;)
Posted by Tony and Heather at 7:30 AM No comments: