I've been pregnant about a million times now.

Or maybe it just feels that way.

Anyway, Tony and I have had lots of opportunities to tell people that we're pregnant.  I've been remembering some of my favorite announcements lately, and decided to write them down so I can reminisce even when the kids have taken all of my brain cells.

I think the first pregnancy always creates the most long-lasting memories.  Some of my favorites from that pregnancy were from before we even knew we were having twins!  We flew to Phoenix to spend Thanksgiving with my sister, my parents, and my grandma, and we made these shirts to wear, so they would know right away when we got off the plane.  Unfortunately, my dad didn't even notice, and drove us all the way to my sister's house before anybody told him!  Ha! 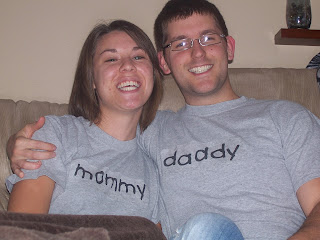 Another one of my favorites from our first pregnancy was telling my coworkers at Focus on the Family.  During our morning devotional time, I said that I had a prayer request.  With a totally straight face, I announced that I had been to the doctor and had been diagnosed with a growth in my abdomen.  I paused, then said, "It looks like it should go away on its own in about 9 months, though!"

I think that we could have had a lot of fun telling people that we were expecting twins, too, but we were so shocked that we just called people and blurted it out!  I'll never forget my phone call to my mom after that ultrasound.  She laughed so hard that I thought she was going to quit breathing!  I was not amused.  :)

When we found out we were pregnant with Marlowe, our due date was the very fun 11/11/11, so I made shirts for the twins with that date on them, and I had them wear the shirts to several places so that they could "announce" the pregnancy for me.  And wouldn't you know, I don't have a single picture of those shirts?

I had actually forgotten about this fun announcement for Cecily until I looked through my photos for this blog post.  I called all of my sisters and told them the news first.  Then, we all took the following pictures and sent them to Paula.  That night, Paula called my parents and told them to get on our family Facebook page, and started posting the pictures one by one.  This was fun for us because somebody else (Paula) was making the announcement for us, and we could just watch it develop!

During my current pregnancy, we found out that we were pregnant two days before our big send-off for my sister, who was moving to Oklahoma.  I knew it was early in the pregnancy, but I wanted to tell everybody when we were all together.  I whipped up this gift certificate from an online template and waited until we had finished the sending-off part of the party (but before my sister left) to hand them out.

Of course, these announcements have been mixed in with phone calls to far-away relatives, and text messages, and casual lunch conversations, and there are probably some super fun announcements that I'm completely forgetting right now ... but those are definitely some of my favorites.  Until next time!  (Just kidding!) (Or am I?) :)
Posted by Tony and Heather at 1:02 PM