This poor baby ... I've only blogged about him once.  So, I'll try to squeeze everything from the entire pregnancy into one post.  That's fair, right?  :)

I'm 32+ weeks right now, and have managed to take exactly 4 belly photos during this pregnancy.  I was visibly pregnant really quickly, but now that I'm looking at a comparison photo between all of my pregnancies, I'd say that my belly has been pretty much the same size at 32ish weeks every time.  Maybe a little bit bigger this time, but it is my fourth pregnancy, after all.  :) 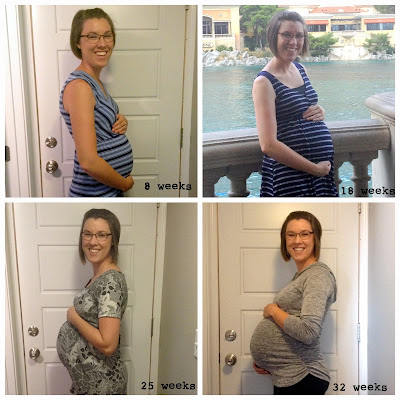 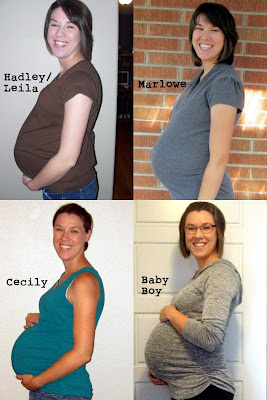 I had a gut feeling that this baby was a boy almost right away.  I still had constant nausea, like my other pregnancies, and even with medicine, I was throwing up about every other day from week 5 until week 16, and then it slowly tapered off.  But the thing that really tipped me off was that I still gained weight -- about 15 pounds during the first trimester, even with morning sickness!  I ate SO MUCH FOOD.  I was hungry!  My biggest craving was cottage cheese.  Those little 8 oz containers weren't even worth buying -- I bought the BIG containers.  Almost anything dairy or sweet did not stand a chance in our house.  And, as usual, I couldn't handle vegetables -- and definitely not the smell of anything tomato-based, or onions.

Still, when you've heard "it's a girl!" four times in a row, it's surprising to hear "you're having a boy!" during that halfway ultrasound.  I believe my response was, "what!?"  His four older sisters were all hoping for a boy (their main reason was so that Daddy didn't have to be the only boy anymore), so they're just so excited for him to be born.  They're going to be really good helpers, and I truly mean that.

I'm planning to have another drug-free birth, although I did have to change doctors and hospitals this time.  My hospital midwife moved away, and after I got pushed around about gestational diabetes testing by the doctor who replaced her, I decided to try another hospital midwife.  She ended up not accepting any clients who have had prior c-sections, but recommended a doctor in her office.  I really like her a lot!  She's young, open to talking about options, and one of my favorite things is that she only asks me to come in every 8 weeks!  This fifth time mama does not need to be at the doctor constantly!

And yes, we do have a name picked out, but we're not sharing it with anybody.  You'll just have to wait for it. :) 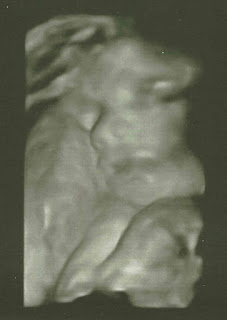 So, we have about 7.5 weeks until my due date.  I haven't gotten to my due date with any of my pregnancies, so fingers crossed that this will be the same way -- especially because Big Guy seems to be large.  Based on the ultrasounds, I'm guessing he'll be between 9 - 10 pounds.  Tony's going to have to start rolling me out of bed in the morning!  :)

We're thankful for all the prayer, love, and support we've received during this pregnancy.  We are so blessed by the people we are surrounded by.  We know that you're as excited as us (well, almost as excited as us!) to welcome this new little person into the world.  Thank you!