In The Middle (Abel's Name Story) 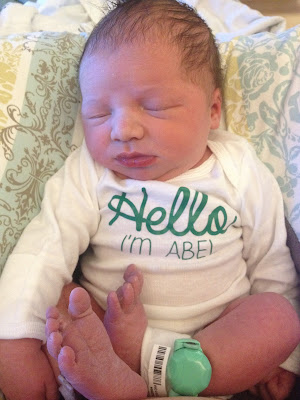 Abel's first name doesn't have much of a story.  I made a list of names that I liked from baby books and baby name websites, and after thinking about it for a few days, Abel was the clear winner for me, and Tony thought so, too.  Done.  Easy.  No sweat.

However, his middle name turned out to be the toughest decision of all of our children's names.  In fact, we hadn't decided firmly on Jude until just after he was born.

Initially, I wanted to use a virtue name, since we have used Grace and Truth as two of our girls' middle names.  After doing lots of research on boy virtue names, I got my heart set on Abel Braver.  Tony didn't love it, though.  So, I kept looking.  Then, one morning, I got the song "Hey Jude" stuck in my head, and thought that Jude had a nice sound to it.  And I remembered that "Hey Jude" actually has a special meaning to Tony and me.

When Tony and I were dating, back in 2004, we decided to take a road trip to Houston/Galveston together during spring break.  We stayed with friends of my family and got terrible sunburns on the beach.  We had only been dating for a few months and weren't talking seriously about the future yet.  For our hours in the car, Tony made a mix CD of songs -- some road trip tunes, some of his personal favorites, and "Hey Jude".  I always thought that song seemed like "one of these things is not like the others", but I never asked about it. 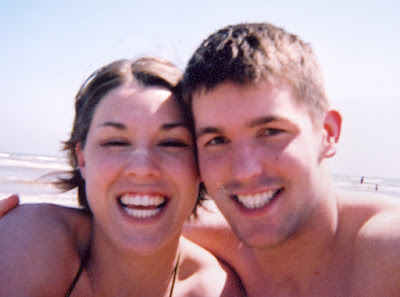 Our selfie (with a disposable camera, ha!) on the beach in Galveston in 2004.

Ten years of marriage and five kids later, I was thinking about that song again.  So when Tony got home from work that night, I asked him about the song from our road trip CD.  He told me something I never knew: that song was a personal reminder to him that "you have found her, now go and get her.  Remember to let her into your heart..."  Well, if that's not the sweetest thing I've ever heard!

Not only that, but when I looked up the meaning of Jude, I was surprised to find that it means "praised" -- the same meaning as Tony!

Things were looking pretty good for Jude, but I still loved the name Braver.  So I hung onto it until after Abel was born, but it didn't take me more than 30 minutes to realize that Jude was the right choice.  It had a story and a meaning.  Our son, Abel Jude.

(By the way, I've had several people ask if we're going to call him A.J.  We don't call him that ourselves, but you're welcome to!) :)
Posted by Tony and Heather at 8:53 PM