Let’s Pick Up Where We Left Off! 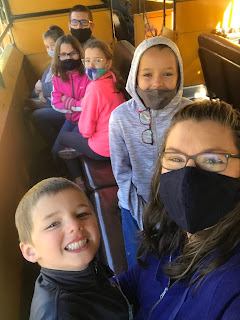 As with most blogs, this blog is sorely neglected, replaced by social media as a way to connect with family and friends. Even though it isn't current, I love the records that I kept with this blog, starting with my twin pregnancy in 2008 and slowly decreasing in frequency through my fifth baby in 2016. I've chronicled things that I'm glad to have in writing somewhere, that the kids can look back at someday.

And with that in mind, I find myself compelled to open this back up and add a few more entries, because a sixth VanHorn baby is coming in late February or early March of this year! I want her to have some of the same recorded stories that I have for the other kids. So, let’s catch up!

Let's start back in late 2017. Abel was not quite two years old, past the baby stage. My sister and her family had started doing foster care in Oklahoma, and Tony and I were inspired by the difference they were making in children's lives. We took a look around our home -- we had an extra seat in the car, space for an extra bed, and room in our hearts for another child. We decided to become foster parents, maybe even with the possibility of adopting a child.

We applied with a local organization, got accepted, and started attending their classes. We did background checks, pored over binders of material, and updated our home to their safety standards. By February of 2018, we were at the final step before being officially licensed -- the home study, where a person comes to our home to make sure it meets the standards, and to give us a final interview.

Everything went well, and we were well into the interview when the interviewer said, "And how will you handle this Important Issue?" (I'm not going into specifics because the actual issue was only a small part of our decision, as you'll see.) Tony and I answered honestly about how we've handled the Important Issue in the past with our children, and how we would handle it in the future with any foster children. The interviewer promptly informed us that while the foster organization considered our answer to be "correct" in terms of foster children, that our answer was "incorrect" regarding our own children, and that we would need to commit to correcting our ways in the future. We were both caught by surprise. Nobody had ever mentioned this specific stance to us, in all the classes we had attended, or in the thick handbook we had read. We asked if there was any flexibility, and the interviewer said no. She cut the interview short and said we should take time to think about it.

I immediately emailed the organization, asking for a written copy of their policy about the Important Issue. They replied and said that they had nothing in writing regarding the Important Issue, but nevertheless, they still wouldn't allow us to be foster parents unless we were willing to agree to their unwritten policy.

Tony and I were uncomfortable working with an organization who had "our way or the highway" policies not written down anywhere. It made me fearful that they could revoke our license any time they pleased, with whatever unwritten policies they hadn't told us about previously. We were also uncomfortable working with an organization that could demand that we make changes in how we parent our biological children. So, we made the heart-wrenching decision to cut ties with the organization.

That ended up being the end of our foster care path. We could have tried to work with other organizations, but for some reason, Tony and I both felt that God had closed the door.

The next two years went quickly, as they do when you're young parents of five kids! Abel proved to be quite a handful as a toddler, and the older girls enjoyed school and their hobbies, and we enjoyed watching them all grow. We were busy, but not too busy, and enjoyed our time as a family.

Like the rest of the world, Covid-19 turned our lives upside-down. Starting in March, the kids had to do at-home learning, and Tony began working from home. We were under a two-week stay-at-home order from our state government from the end of March into the beginning of April, and any business that wasn't "essential" was told to shut down temporarily.

And then, in June, the now-obvious results of not getting around to scheduling that appointment happened: I realized that I probably needed to take a pregnancy test. :)

I'm sure you know the result of that test! Baby #6, due almost exactly five years after our "last child". I kept it from Tony for about 24 hours, when he and I had planned a date night together. After we placed our order at the restaurant, I slid a card across the table to him. He thought it was a Father's Day card and said "Aww, you didn't have to get me anything!" I said, "I'm pretty sure I did!" :) He opened it, and quickly realized I was telling him something much more important than Happy Father's Day. He spent about two minutes being completely shocked, and then, like the man I know him to be, he embraced it. I could see him getting excited, like he has for all our children.

We didn't understand God's plan when we were unable to get licensed to do foster care. But God knew, in just a couple of years, that we would fill that seat in our car, create that space for another bed, and fill that room in our hearts for another child.

This baby may not have been a part of OUR plan, but she was always a part of God's plan, and she certainly has always been loved. 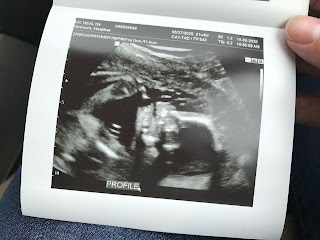 Posted by Tony and Heather at 8:07 PM

Beautifully written!
And I don't know what that Important issue was exactly, but we've considered getting licensed for foster care as well and there are several Important issues I've wondered about them accepting from us. We'll see what God has for the future - it is, after all STILL in His hands!
Excited for the arrival of your new little one soon!