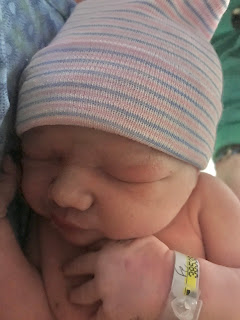 Whim is one week old now! I'm a little sleep deprived, but so far she's a really happy baby and we're all enjoying her.

I'll start Whim's birth story way back on February 7. I wasn't quite 37 weeks pregnant, but I started having contractions in the middle of the afternoon. After a couple of hours, I called my mom, who was planning to stay with the kids while I was in the hospital. She made her way to our house, which takes an hour ... and by the time she arrived, the contractions had stopped. She stayed for another day, just in case, then she went home.

The next couple of weeks were the same. I'd start having contractions in the evening, and they'd stop after I went to bed. Mom checked in every day or so, but I didn't ask her to come again, knowing that we had several people who could come stay with the kids if Mom couldn’t make it in time.

Really, it was only a week, but it felt like a long time. On February 28, we attended church at home via livestream because I was having contractions, but nothing continued. In the afternoon, Tony and I went to a local park and walked a few miles. Disappointingly, I think I had three contractions the whole time.

Finally, on the evening of that day, the 28th, my contractions settled into a rhythm. I told the kids at bedtime that Daddy and I were probably leaving for the hospital, and maybe by morning, they'd have a new baby sister! Marlowe and Cecily were a little scared, but Grandma helped them be brave. We stayed home until I had a few contractions that were 2-3 minutes apart, then we headed to the hospital around 8:30 p.m. The next few hours felt very similar to Cecily's birth -- the nurses weren't convinced that I was in labor, so they would monitor my contractions for either 20 minutes or an hour, then we would go walk the hallways for an hour, and repeat. Midnight passed, and February turned into March. The nurse said that I had two choices -- to go home, or to be admitted, but they weren't really encouraging me to get admitted because they thought labor might stop. I told them that I knew I was in labor, and asked them to admit me. (I think nobody ever believes me because I labor very quietly, and at that point I was just barely getting to the point where I couldn't walk or talk through contractions.) 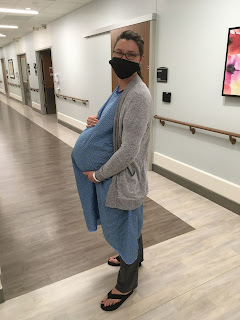 (We only had to wear face masks in the hallways, thankfully!)

We got to our delivery room somewhere around 1 or 2 a.m. My labor and delivery nurse was AMAZING, and I actually know her mom from our previous church! She mostly left us alone, and I alternated between laboring standing up and with a peanut ball. Tony squeezed my hand or bear-hugged me during contractions.

At some point, I threw up, which was a first for me in all of my labors. All of a sudden, sometime after 3:30, I felt things change. I waited for another contraction to be sure, then I told Tony to go grab the nurse because it was time to push. I barely made it to the bed, where my water broke. The nurse ran in and confirmed that the baby was coming, and told me that the doctor needed 10 minutes to get there from home. (My doctor was on vacation, so this was the on-call doctor.) I knew there was no way that this baby was going to wait 10 minutes. In the next few minutes, several more nurses came in. Somebody told me that the baby's oxygen rate was dropping, had me put on an oxygen mask, and had me roll to my right side to improve the baby's oxygen levels. At the same time, the nurses were encouraging me not to push so that the doctor could arrive ... but I decided not to listen since baby had low oxygen. I gave birth to her in only a few minutes, and a doctor who was already at the hospital delivered her at 3:52 a.m. That's when they discovered why her oxygen rates were dropping -- she had her umbilical cord wrapped around her neck THREE times. It wasn't life-threatening, thankfully, but still shocking to discover!

They put my new baby girl on my belly -- hello, Whim! I love the moment when you get to meet your new baby. Dark hair, but not as much as some of my other kids, and I could tell right away that she was smaller than my other babies (with the exception of the twins). She ended up weighing 8 lbs 3 oz, still good sized! 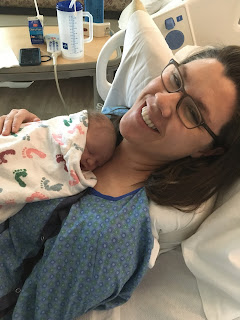 Let me take a minute to say how thankful I was for Tony during labor and delivery. He walked SO MANY miles with me, both before labor started and in the halls of the hospital. (He walked, I waddled!) He put socks on my feet for me. He hugged and squeezed in whatever places helped the pain of contractions. He barely had time to use the restroom at one point before I yelled, "I need you!" He held my hands and watched as the baby came faster than any of our other babies, concerned for her low oxygen rate and concerned for his poor wife who was suddenly not laboring quietly. I watched him as he adoringly looked at his new baby girl after she was born. He is a treasure to me and I'm so thankful for him. 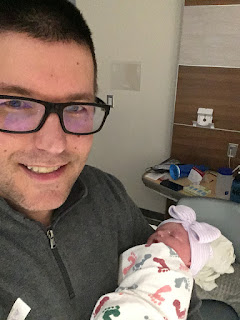 I had some bleeding that wouldn't stop, but the nurse was able to get it under control with a couple of medications. Whim had also inhaled some amniotic fluid on her way out (thankfully not meconium), and they had to do some intense suctioning to help her out. She was a little grunty and fussy for about a day, but she's been perfectly happy and healthy since then.

We stayed at the hospital for just over 24 hours after she was born, and came home to some very excited siblings! (And a very excited Grandma, too!) Their hearts just explode with love for her. And my heart explodes with love for every single one of them.

A beautiful story. Thank you for sharing. I think Whim is one of the most beautiful names ever. Hugs and prayers for all of your wonderful family❤��